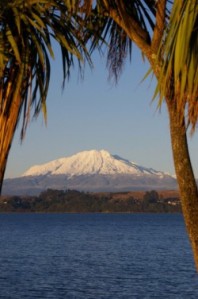 Volcano Calbuco framed by trees along the shores of Lake Llanquihue at Puerto Varas, Chile. Photo by Herb Saperstone

In 2007, we visited our daughter Lindsay who was studying abroad in Valparaiso and took an adventure south to the Lake District of southern Chile. One of our favorite stops was the postcard pretty resort of Puerto Varas- some 630 miles south of Santiago.  In early July, southern Chile shivers in  the austral winter season- short days, long nights  and plenty of snow to gaze at atop the Andes Mountains.  Along the shore of Llanquihue Lake we marveled at the ‘Fuji-like’ presence of Osorno Volcano and its sister peak, Volcano Calbuco. The dark volcanic sands and gravels along the waterfront are a testament to the newness of these majestic volcanoes which dominate the western coast of South America for thousands of miles.
When news broke last week that the sleeping Calbuco was erupting after 40 years of quiescence, I realized we had been there and recalled the amazing scenery – a product of profound forces of nature. 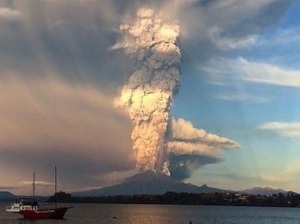