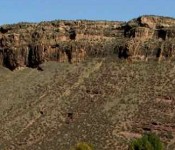 Geologic Setting
The rocks exposed at Lory State Park are the product of geologic processes that have shaped Earth’s surface for nearly 2 billion years.  Interpreting this long geologic history requires an appreciation for the vast stretches of time- barely comprehensible to our relatively brief human perspective of Earth history.  Nonetheless we can make sense of the area’s distinct geology by looking at how forces of mountain building play against the forces of erosion and wearing away.  It is this incessant struggle of nature that makes its mark on the geologic setting of Lory State Park.

Based on clues found in metamorphic rocks now exposed along the Front Range, extremely thick (probably more than 8 miles thick!) layers of sand, silt and clay were deposited in ancient streams, beaches and oceans nearly 2 billion years ago.  Buried, cemented and subjected to deep seated forces of heat and pressure these rocks were metamorphosed to mica schist, and hornblende and biotite gneiss 1 . A second episode, closely timed to the first, caused deeply buried rock to melt and slowly rise into the existing mass of schist and gneisses.  It’s a process similar to the upward movement of magma below active, modern-day volcanoes. Isolated bodies of this hot material slowly cooled to form  masses of coarsely crystalline ig­neous rock called granite and pegmatite. Today we find evidence of these ancient events in the rocks themselves.  Large pink, white and milky colored crystals are laced throughout much of the rock that forms the resistant peaks and ridges of Arthur’s Rock and Horsetooth Mountain.

The next chapter in the long geologic story of Lory State Park began when forces within the earth uplifted the igneous and metamorphic rock into a rugged highland called the Ancestral Rockies.  Evidence of this episode of mountain building is beautifully exposed along isolated out­crops of red-stained sedimentary rocks (Fountain Formation·2) that are exposed on the east­ern side of Lory State Park. Unlike the underlying igneous and metamorphic rocks, these sedi­mentary rocks have been created by processes on the Earth’s surface.  As a result, geologists can recreate with fine detail the physical environments of nearly 300 million years ago. As sun, wind, and rain slowly wore away the Ancestral Rockies, sediment-clogged rivers were suc­ceeded by beaches and desert dunes. The record of these events is recorded in each layer of sediment and is exposed as red, pink, and tan ledges of sedimentary rock (Ingleside Formation 3¸, Lyons Sandstone 4¹). Below Horsetooth Reservoir and the rock-strewn slopes along its eastern shore, numerous cycles of deposition are marked by alternating layers of sandstone, shale and limestone.  Among them are the multicolored maroon and greenish beds of the dinosaur-aged Morrison Formation 5 and the overlying ridge-forming sandstones of the Dakota Group 6.  The igneous and metamorphic rocks of this area were now buried under several thousand feet of sedimentary cover.

Uplift of the Rocky Mountains

The closing chapter of this story began when mountain-building forces were once again reacti­vated along zones of pre-existing weakness (faults). Commencing about 65 million years ago, large blocks of igneous and metamorphic rock began to rise from below.  As the modern Rockies arched skyward, the overlying strata buckled and tilted.  No sooner had this upheaval com­menced that erosional forces began to excavate deep into the core of the uplift  In time, the 1,700 million year old crystalline rocks were exposed once more by streams that cut through the tilted flanks of the newly uplifted Rockies.  Erosion ruled over uplift as streams easily excavated the soft sediment to create long valleys, leaving the resistant, more durable ridges intact. Today erosion continues to wear away at the flanking layers and slowly expose deeper levels of the Rockies’ ancient core.