PBS’s NOVA reports on tornadoes in the wake of the recent deadly storms that devastated Moore Oklahoma and surrounding areas. Why are almost three fourths of the world’s tornadoes located in the US? The unique climatologic and geographic conditions found in the North American midwest account for a great deal of it. The other reason, they offer, is many countries mis-report or don’t report these storms as tornadoes at all. Check it out.
http://www.pbs.org/wgbh/nova/earth/tornado-country.html 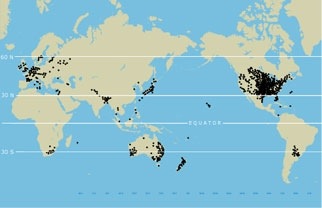 From Donna to Sandy- A Precautionary Tale

Fifty two years and 7 weeks later, my hometown of Rockaway Beach is ravaged by the ‘storm of the century’. Technically that would be this century. The hurricane-turned superstorm “Sandy” struck this part of coastal New York as did Hurricane Donna a half century ago on September 12, 1960. But this 21st century storm was far more powerful. This was due to the aggregation of massive storm systems coupled with a high tide that doomed the barrier islands along the mid-Atlantic coast. 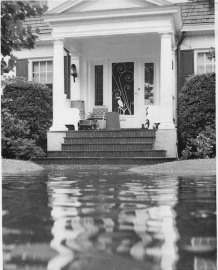 Is this the realization of global warming? Is this truly emblematic of the intensity of weather events now being predicted? Between the scientific analyses and the political maneuvers to affirm or deny what we are or aren’t doing to affect climate change, one thing is clear to me. Nature, eventually will win over our attempts to control it and we must accommodate this fact of life. Is this a 50 year storm or a 100 year storm? Left to human memory, we are woefully disadvantaged to see the real time scale that affects climate in hundreds or thousands of years. 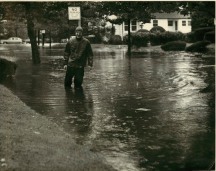 Brother Sandy (no relation to the 2012 storm) wades through the flood waters brought on by Hurrican Donna on September 12, 1960.

Instead of the, “is it climate change, or not argument” I like to invoke the precautionary principle which subscribes to the idea that it makes sense to mitigate our impact on our earth’s atmosphere despite the “truth” of global climate change. So, given we are warming from an Ice Age, if sea level rises less quickly (and it will) and if global temperatures rise more slowly (and they will) than predicted, why not take steps anyway to invest in better seawalls, levees, and smarter zoning along areas where we are most vulnerable. When we buy insurance for our home, vehicle, and our family, aren’t we also also subscribing to the adage “better be safe than sorry”? Floods, fires and quakes are natural processes on our planet, so why not improve our relationship with nature by reducing our carbon footprint, and moving toward more sustainable forms of energy use. Although I may live 2,000 miles away from my childhood home, the recent images of destruction and loss remind me how connected we all are.