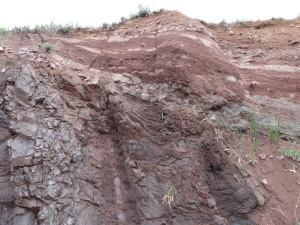 What is the “Great Unconformity”?

Thanks to Dr. John Ridley of CSU Geology and our intrepid Northern Colorado Geology Group, we braved cool temperatures and rain to learn more about our local geology.  So, what exactly is the Great Unconformity?  Not-fitting-in is partly the answer. In geology-speak, an unconformity represents a break in the geologic record of earth history.  Here in the Front Range of Colorado, we live minutes away from this amazing geologic feature- namely the contact between 300 million year old Fountain Formation (red, horizontal strata) and the underlying nearly vertically tilted 1.7 billion year old Precambrian schists and granites.  Although sporadically visible in places along the Front Range, the Great Unconformity is beautifully exposed west of Loveland near Pinewood Reservoir.

What always amazes me about this is the story it tells about a very ancient mountain range (1. 7 billion year old schists and granite) whose surface was reworked by 300 million year old rivers -now red sandstone).  Although the time interval between these 2 events is still over 1400 million years, we can unravel what happened with astonishing clarity right here!  Geology is as much about what is left behind as is what is missing. In this case– a lot!   That’s what unconformities are all about- missing pages of earth history.  So, next time you’re hiking in the foothills see if you can predict where this contact occurs. Or if you’re attending a show at Red Rocks- come early and take a few minutes to visit the Precambrian-Fountain contact which is marked by a plaque behind the amphitheater.  Unconformities rule!